The Ten64's expandability makes it ideal for both cellular and WiFi wireless applications.

Just because you can assemble it, does not mean it's legal, especially if you wish to resell a product with radios inside.

For these reasons, Traverse Technologies does not sell systems with wireless cards to individual end users at this time.

If you intend to sell a Ten64 device with wireless radios installed, you will need to follow any applicable regulations in the country/countries you sell the device in (e.g FCC Modular approval guidelines).

Antennas and cables - a quick primer¶

Antennas for cellular and WiFi use generally use a form of SMA connector.

Mini-PCIe wireless cards use "U.FL/MHF", whereas M.2 cards use the much smaller "MHF4".

As as general rule, you will want 200mm cables to reach from the wireless cards to the antenna cables on the left (fan side) of the Ten64 enclosure. (250mm is needed for the cellular card). You can use shorter (100mm-150mm) for the antenna mounts on the right side.

MHF4 cables are very delicate due to the small connector size and cable diameter. They have very limited 'cycles' (connection and disconnection) as a result. It is a good idea to order a few more than you think you will need.

We also suggest having an 8mm wrench to tighten the SMA connectors to the enclosure. 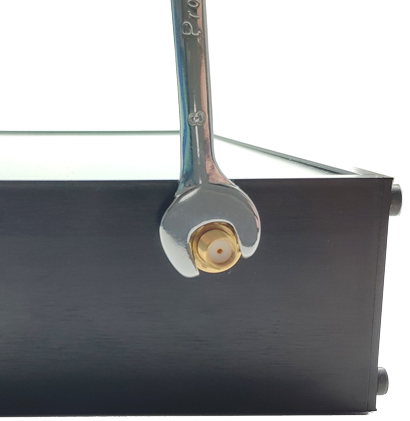 Cable ties and cable tie mounts are recommended to keep the routing of radio cables tidy inside the unit.

As the U.FL/MHF4 connectors on the radio modules can be dislodged by bumps in transit, we recommend applying silicone adhesive to the connectors to keep them secure and in place. DOWSIL 744 is one such sealant. The sealant can be easily be removed later with a craft knife and blade.

At the moment we recommend Qualcomm based 4G and 5G modems, and Qualcomm Atheros WiFi 5/6 cards (ath10k and ath11k family).

Dual Band = One Band At a Time¶

Note that "dual-band" in the context of WiFi cards means that the card has a single (1) radio that can operate on either 2.4GHz or 5GHz. It does not mean the card by itself can work on 2.4GHz and 5GHz simultaneously, so you will need two cards (not necessarily the same model) to implement a dual band setup.

Recently, "Dual Band Dual Concurrent" cards have appeared which can do dual-band in a single module. As discussed later in this document, these are generally aimed at the low end or client markets and often have limitations (such as 2x2 MIMO only, no Multi-SSID).

Some MiniPCIe WiFi cards come in "half-height" format, but the Ten64 has full-height MiniPCIe slots. Brackets/adaptors to convert half-height to full height can be found on marketplaces like Amazon and eBay.

The RM500Q-GL has four antenna ports:

Most 5G modules with the SDX55 chipset have similar antenna port configurations, check the datasheet of your module for specific details.

It is best to route antenna ports with low frequency (600-1000MHz) bands to the right side of the enclosure, while the high frequency antenna ports should be routed to the left side.

This may sound counter-intuitive (as the high frequency ports will have more cable loss), but this is balanced out by the low frequency ports not getting as much interference from the board itself. 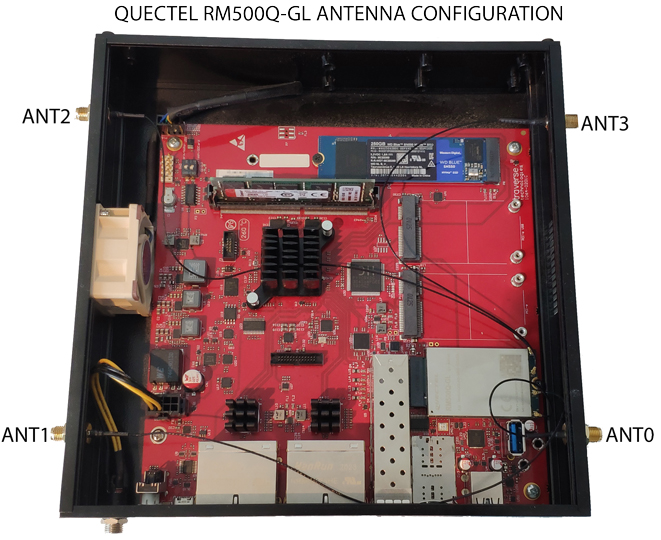 This setup requires these cables/pigtails:

Using an external antenna can improve performance with mid and high cellular bands ("sub-6") which is important for high throughput. The antenna can be installed outside a building or near a window and pointed towards the nearest tower.

You can route the antenna connectors directly to the 3x2 grid at the rear of the Ten64. Mapping between individual ports on the modem and antenna array isn't as important in this case, but the datasheet for the antenna might show certain antenna elements being more suitable for a particular band. 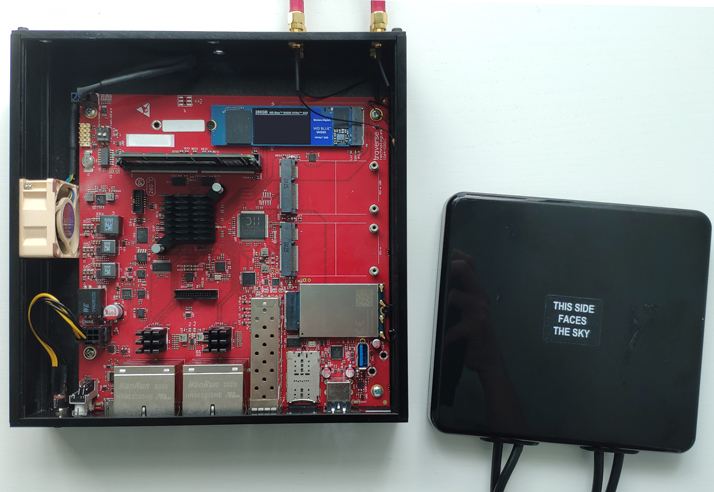 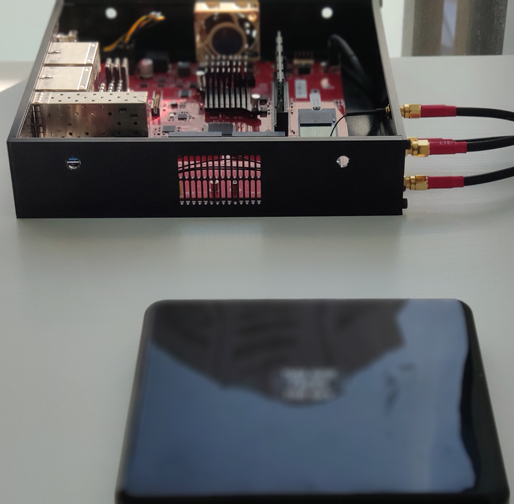 This setup uses 200mm MHF4 to SMA cables. 250mm is recommended for the connector mounts near the centerline of the unit.

The maximum practical configuration with the Ten64 enclosure is 4x4+3x3 MIMO (e.g 4 MIMO on 5GHz and 3 MIMO on 2.4GHz). If you don't have many 2.4GHz devices and/or have a smaller space to cover, 2 MIMO on 2.4GHz is sufficient. 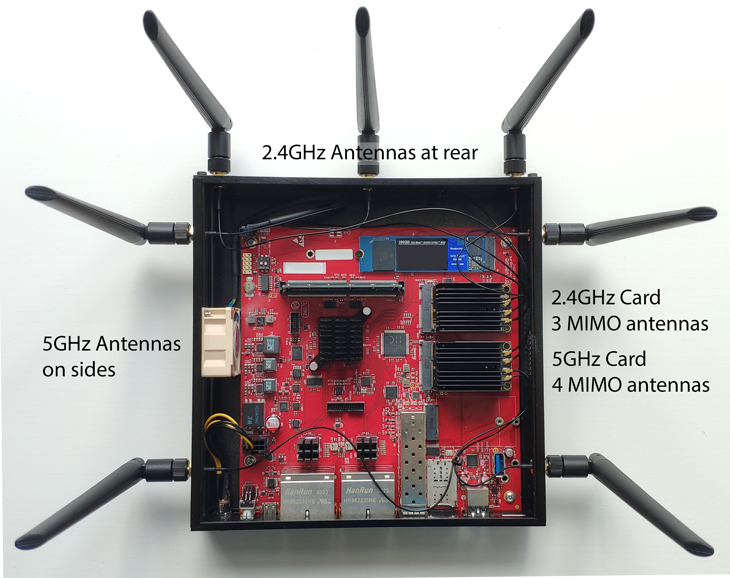 This setup requires these cables/pigtails:

As the antenna ports on WiFi cards are identical there is no preference to route certain ports to certain locations (unlike cellular). However, MIMO separation requirements mean it's not practical to add more antenna ports for use with terminal mount antennas.

A "full throttle" cellular and WiFi configuration is difficult to achieve with the Ten64 desktop enclosure, as the latest iterations of both technologies demand 4 MIMO/antennas.

There are some options available:

Use a lower speed grade of each technology, which does not require as many antennas

LTE Category 12 (600mbit/s max) and below can work with only two antennas.

Some 5G modules also support reduced antenna configurations with a decrease in throughput. (Check with your carrier and module supplier if they will support such a configuration)

As many WiFi clients only have 2x2 MIMO support, there may not be a significant decrease in performance when downgrading from 3x3 or 4x4. However, performance with multiple clients and through RF impediments such as walls may decrease faster.

Use an external (not attached to the unit) antenna

This works well for cellular technologies, where better reception can be obtained by having an antenna outdoors or near a window.

At the time of writing (2021-10) these chipsets are very new and may not have full software support for their DBDC functions. Also, compared to standalone, single-band modules, these chipsets may have reduced functionality (e.g no multi-SSID) in DBDC mode.

Diplexer's are another option, but engineering them to ensure good performance across both bands can be difficult.